Most people wonder what are the most common paintless dent removal dents that are repaired. We’ll give you a breakdown of about 4 different common and typical dents. 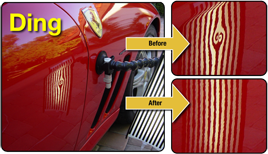 The most common by far is the door ding. These typical little dents are classed as the size of a quarter or smaller (1″ inch). Caused from mainly car doors, shopping carts and flying objects. Generally they are not the most difficult but it doesn’t mean they are always the easiest either. A big misconception is the size of these little annoying dents. Even though they are not very large, depending on the depth, location and access will play a part determining the final cost.

Generally the cost is between $89-$125. Multiple dings and panels are discounted.

Second most common are dents that range from golf ball to a business card size (2″-5″ inches). These type of dents normally are caused from flying objects, moving vehicles and objects dropping from above or against. The bigger the dent, usually the more stretched the panel has become. Therefor more time is involved. Same rules apply. Depth, location and access will determine final cost.

Dents that are the appearance of a line. These particular crease dents are one of the most complex dent removals to achieve. Imagine folding a piece of paper and then trying to iron the line out. Well imagine being so precise with a tool we use and pin pointing the exact area we need to push on without disturbing your finish. It’s very difficult and that is why creases are considered one of the most challenging type of dents to remove.

Large dents are 6″ in diameter or bigger. The more stretched the more difficult. Some large dents are not as complex as they appear. In some cases, we can manage to release pressure just in the right spot and bring back 80% of the panel back to new within 5-10 minutes. But in most cases, it will take time and a lot of hand-eye coordination to work the dent out.

General cost range: Depending on the depth, access and location, $200 and up

One thing to keep in mind though. Not all dents are created equal and nor is the skill of any random technician. We highly encourage you to consider our team to work on your vehicle. Our reputation is second to none which ensures you will get the best results at the best value. Not to mention a 30 day ding

Paintless dent removal is a delicate process and demands the best experience at all times. Dent Time offers true practical knowledge and takes tremendous pride in our work.

We have established a strong reputation for being the best at what we do. We don't cut corners when it comes to the integrity of your vehicle and more importantly the quality of your repair. Our service is fast, affordable and done right, on-site with a lifetime warranty and satisfaction guarantee. 1-858-699-2054

Subscribe AND SAVE.
Get spacial offers and discounts we only submit to our subscribers.
YOUR EMAIL
Subscribe
×